Rancilio Silvias are robust machines. They do have one achilles heel though, and that's the group-head cover. Over time it will eventually bubble and the chrome will start to peel off. You'll find underneath the chrome foil is a plastic surround. Ever since the Mk2 Silvia this has been made of chrome plated plastic. 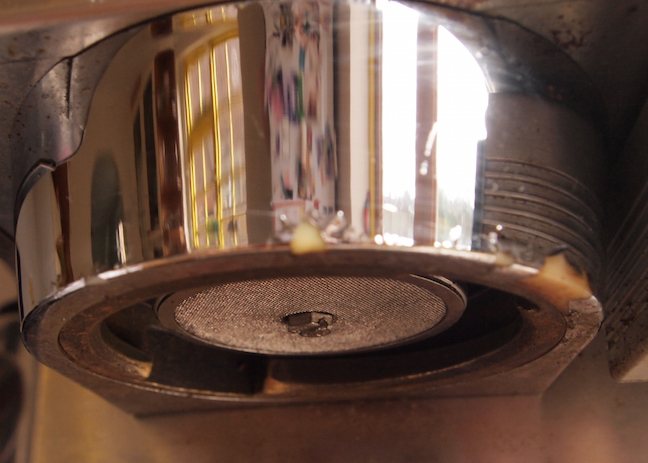 As I was doing the job of replacing this part for the third time I thought I'd get down to documenting the procedure. It might look daunting but really it's very easy as long as you're comfortable wielding a screw-driver.

Safety first. Switch off the machine and unplug it. If it's hot let it cool first. As far as tools go you'll need a large and small philips screwdriver and that's it. Obviously you'll need to have sourced a replacement group-head cover from your local rancilio parts vendor.

Emptying + cleaning the drip tray is a good idea as at some point screws can fall off into it and it's nicer if it's dry than trying to locate them in murky coffee gunk.

This part is easy! 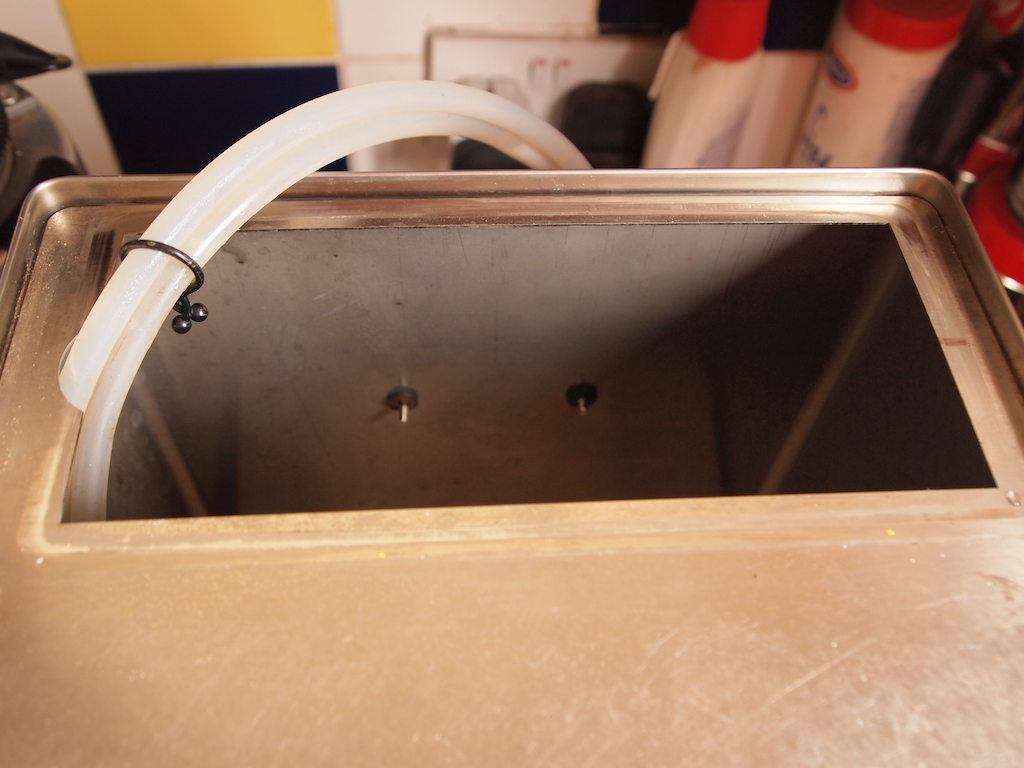 Before you do this you did unplug the machine didn't you?!

Just undo the four screws (see the picture below for arrows) and remove the cover. 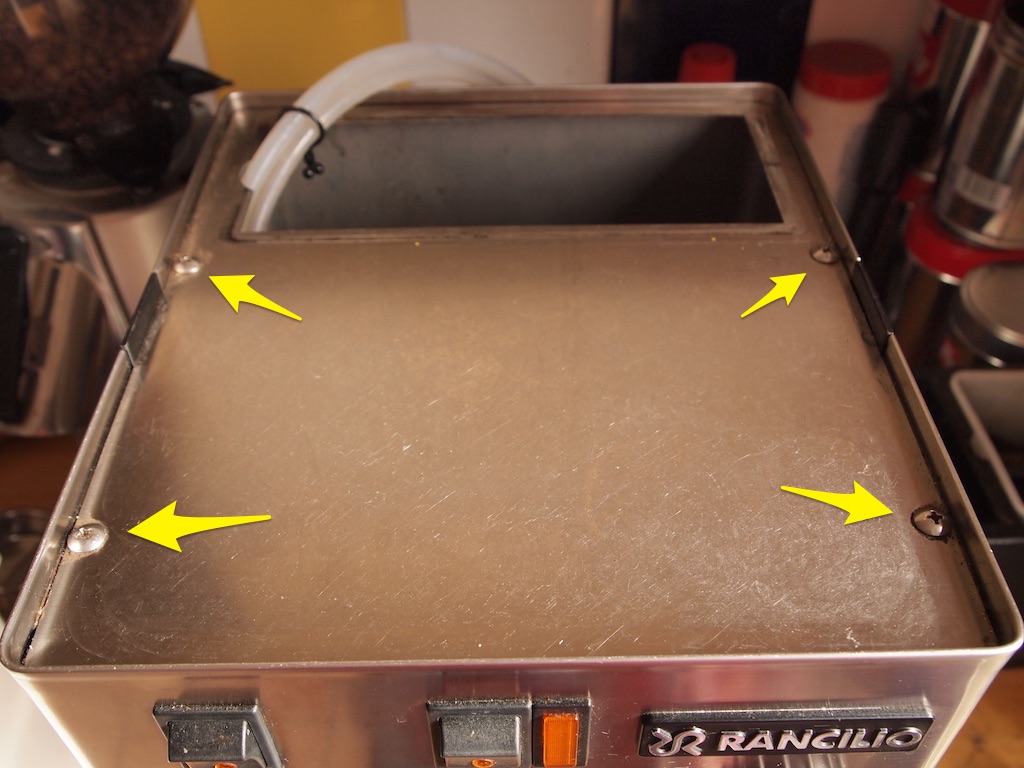 3. Undo the screws holding the top of the back cover

Undo the 2 screws pictured with the smaller philips screwdriver. Don't worry if they fall of, the screws will be in the drip tray underneath your machine. 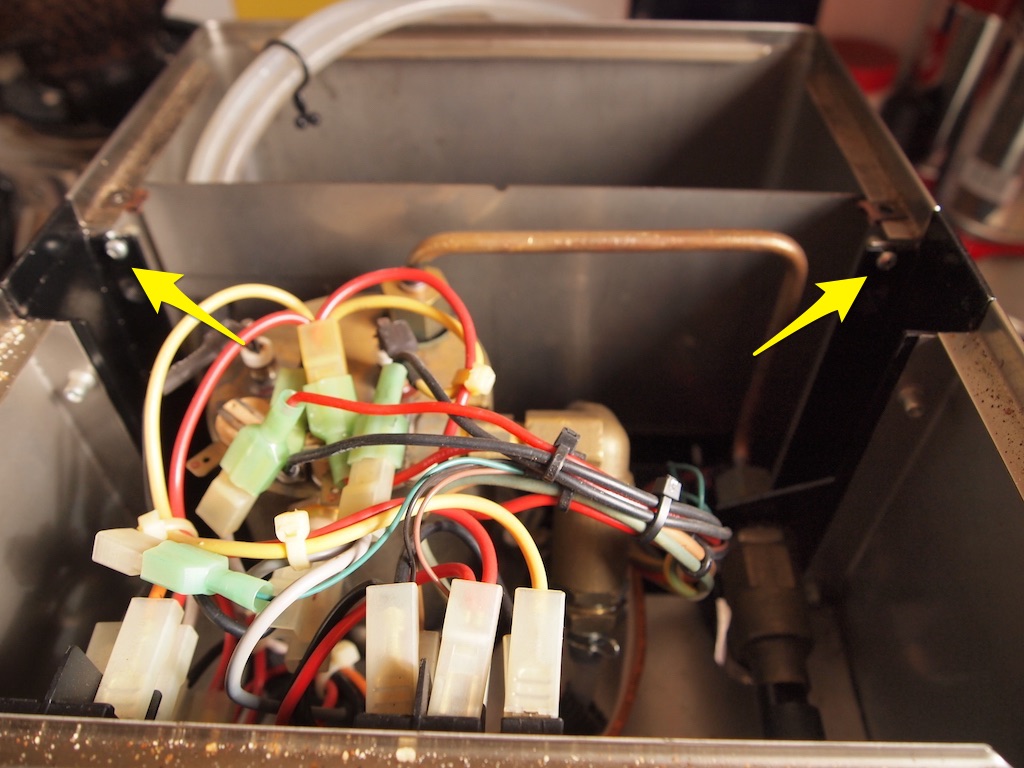 4. Loosen the screw holding the base of the back cover

You might find it easier to turn the machine so the back of it is facing you. See the notch in the picture that's arrowed? Beneath that is a screw, you just need to loosen it a bit so the back cover will come off. 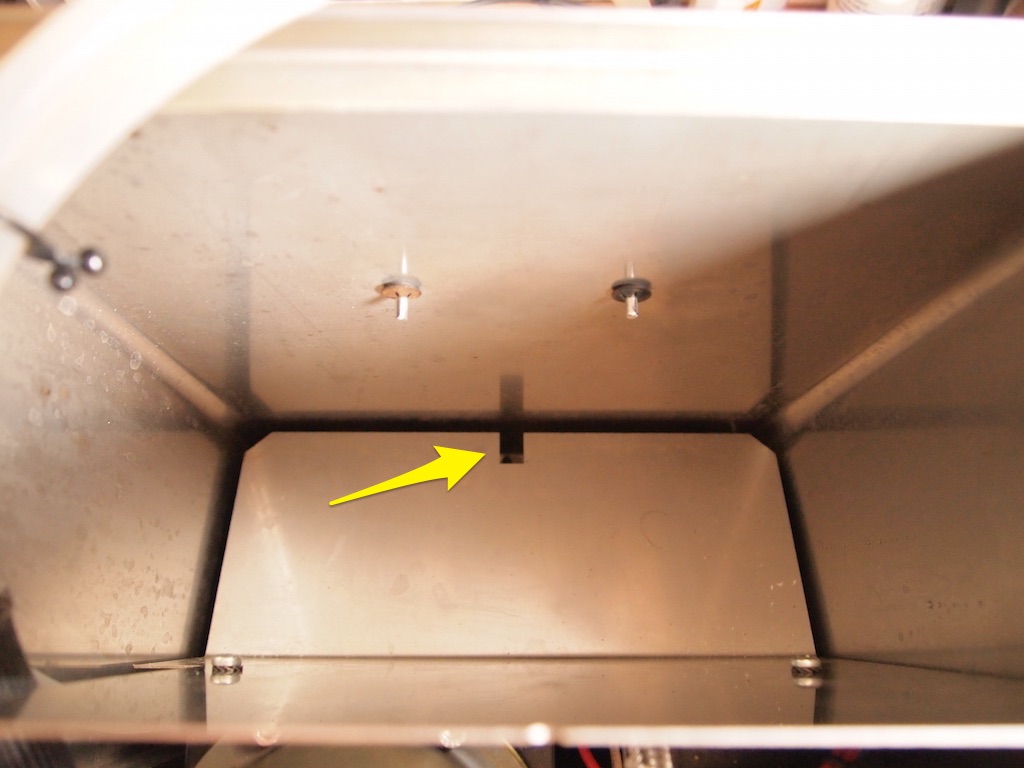 5. Pull the back cover off it's retaining posts

Grab the back cover with both hands and pull it squarely backwards (in the direction of the blue arrow in the picture below). You'll see some threaded posts towards the bottom of the cover wheer it joins the black frame. You just need to clear those. 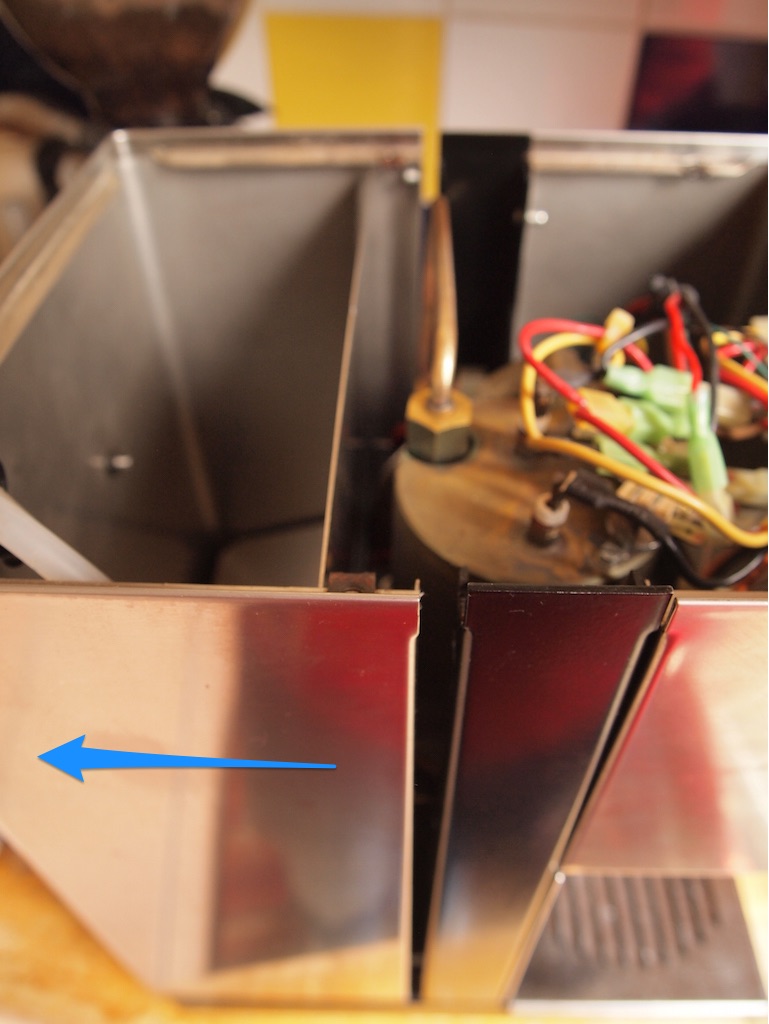 To do this just leave one side where it is and hinge the cover so it clears the splash panel at the back. You can flex the cover a little bit to clear the edge of the splash guard. 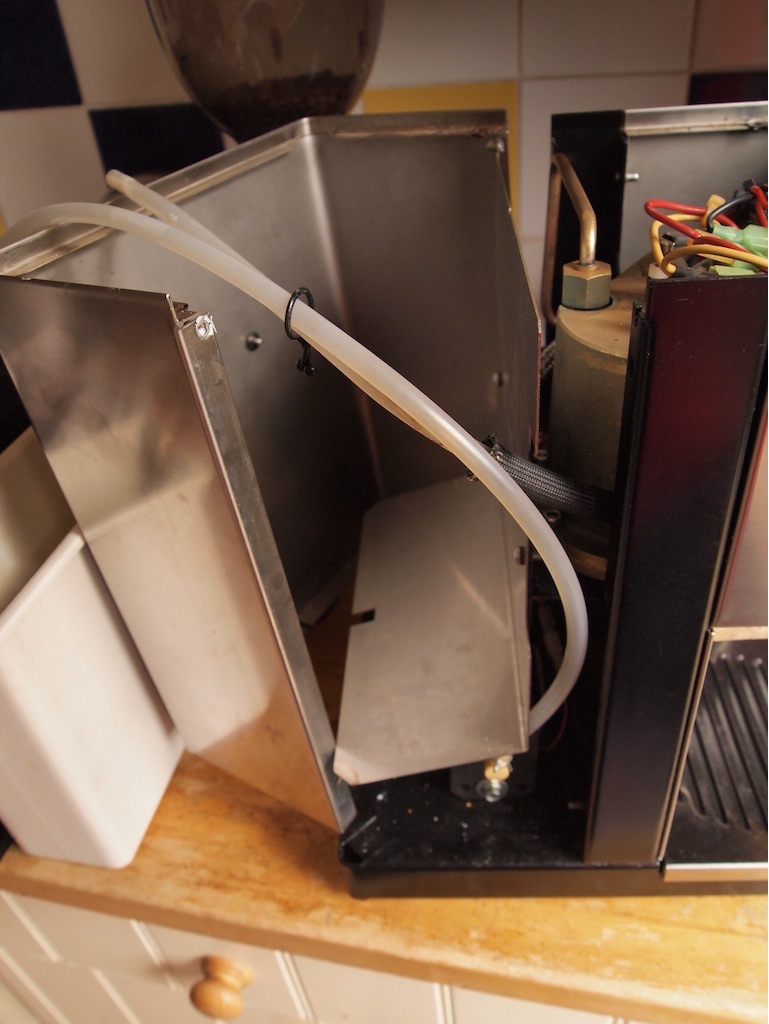 The splash guard protects the pump. It's attached with two bolts (arrowed). Just remove them to take it off. 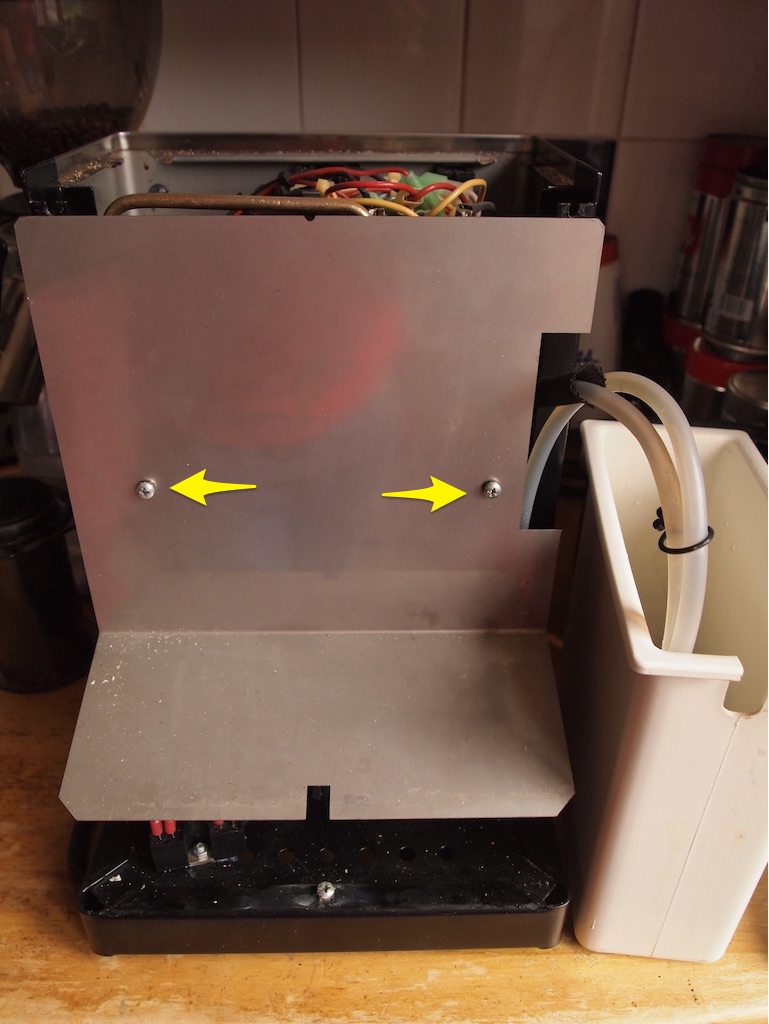 4 small screws locate the front cover see the arrows for a rought idea of where to find them. Undo them. Again if the screws fall off they'll almost certainly be found in the drip-tray or caught up in the ledge at the bottom of the frame. 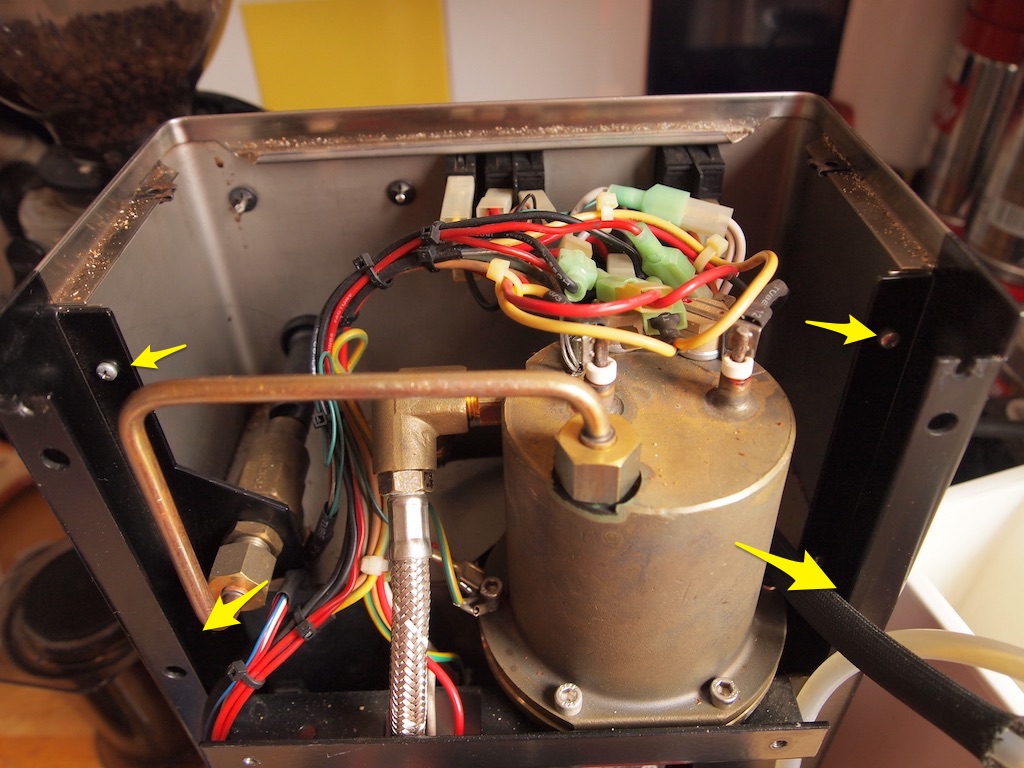 Easy-peasy it just slides off. 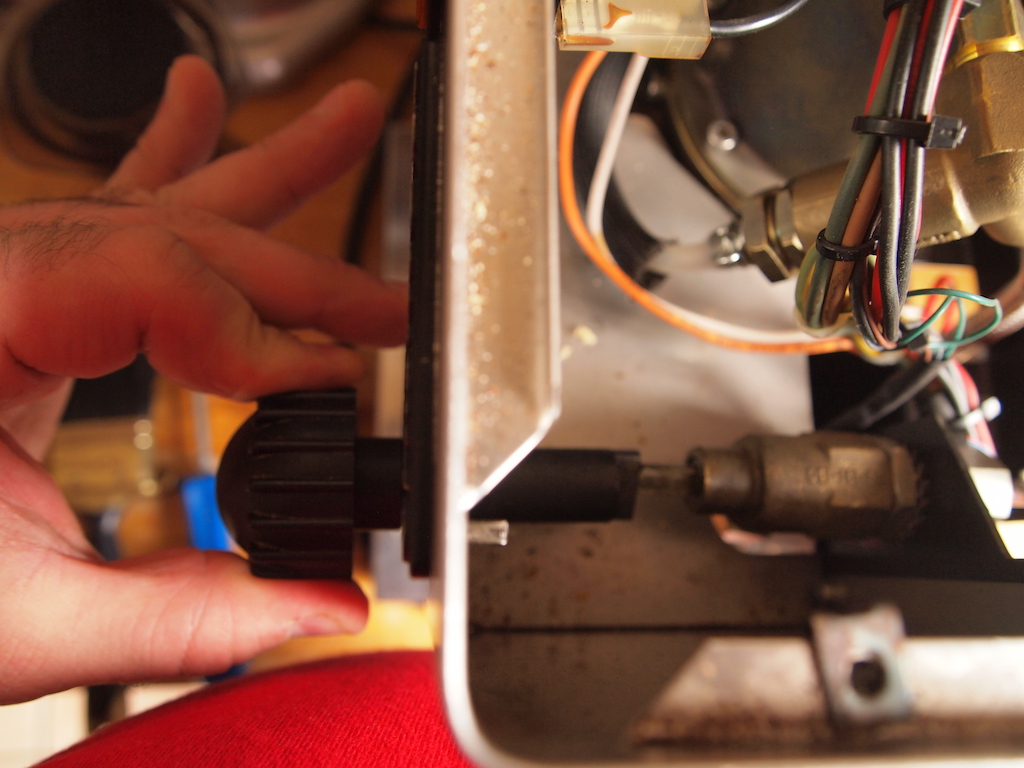 10. Loosen the screws holding the top cover to the grouphead.

These two are a little tricky to get to. Use a long screwdriver at an angle for the far one. Remember these don't need to come out completely just loosen them so the cover can slide forward to be lifted out of the keyholes. 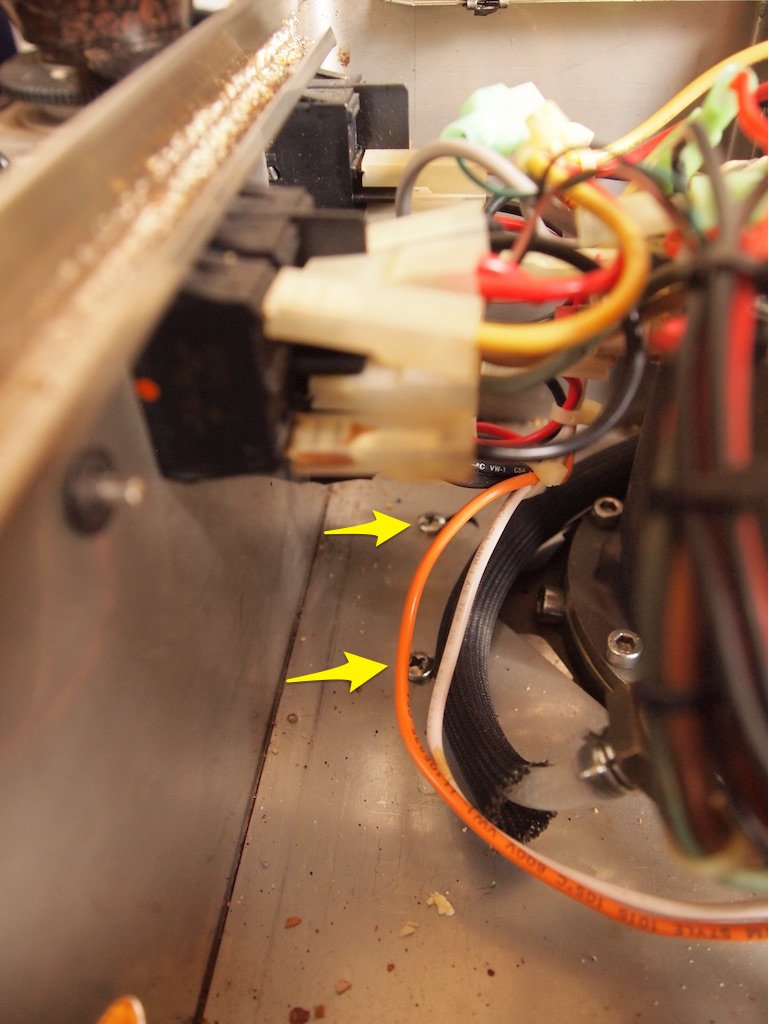 First slide the front cover forward and up off the screws you loosened in the previous step.

The front cover should be held somewhat by the wires as you do this, but take care not to disturb any of the wiring.

Once you've done that undo the two screws that the arrows in the picture point to. The far one is obscured by a pipe. 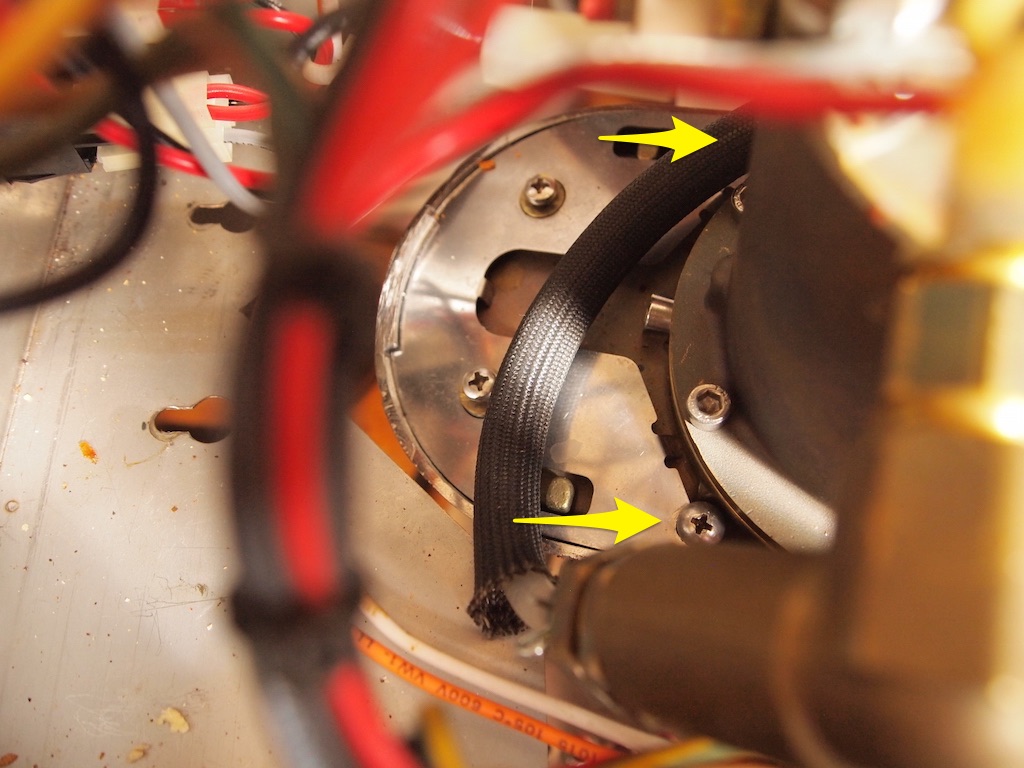 The plate that holds the new cover on needs to tuck under the lip at the front. (You can see this clearly in the previous picture. This part is the most fiddly.

If you first offer up the new cover so it's in place. Next angle the plate so you can push the front under the lip of the new cover. 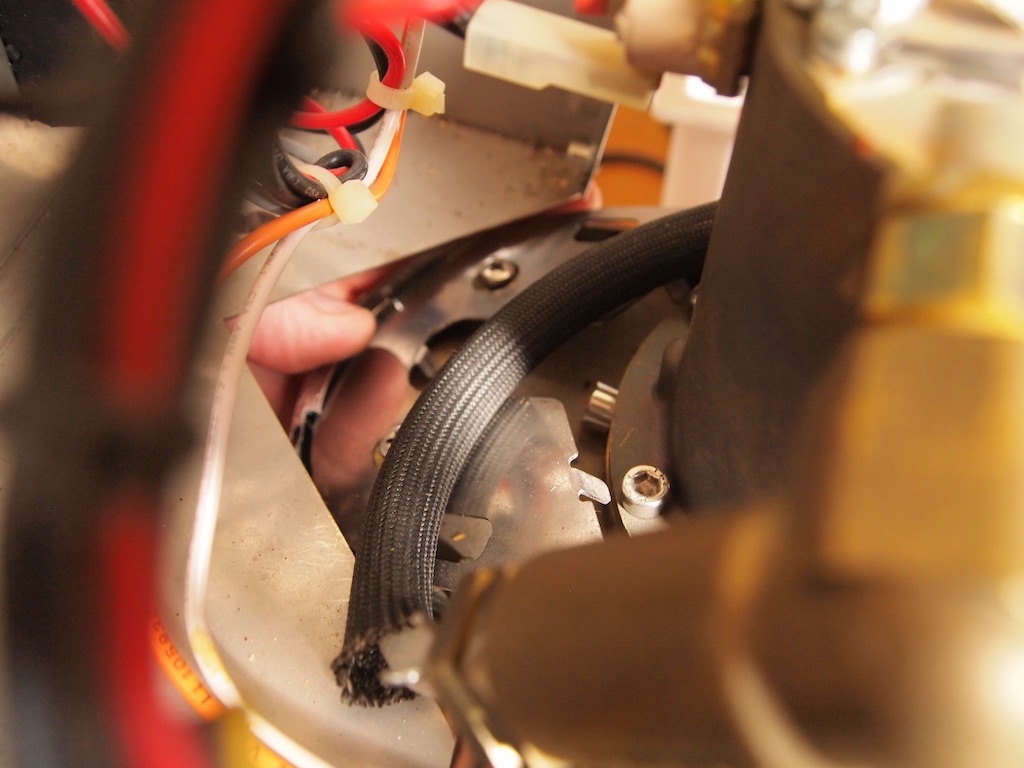 Then hold the back of the plate down and screw the cover down. 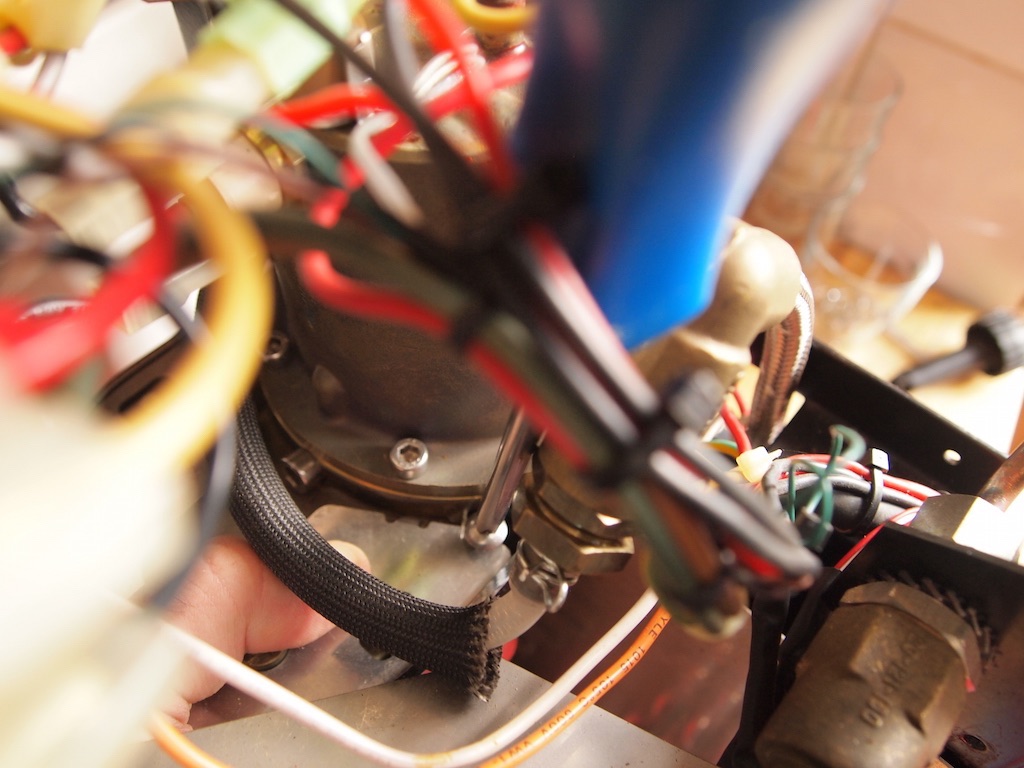 Don't go too mad with tightening the screws into the new cover just make sure it's held firmly enough and doesn't wobble otherwise you might bend the plate or worse break one of the posts off the new cover.

Put it all back together

To finish the job reverse the steps until your machine is whole again. As you do this you can clean any bits whilst you have access. 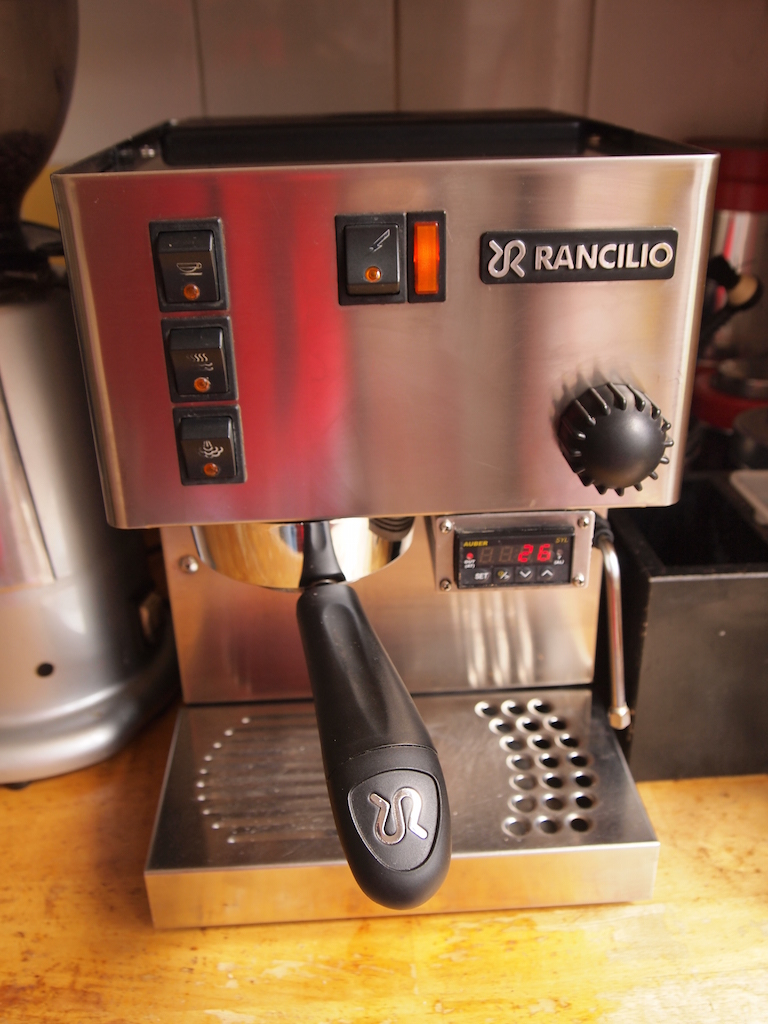 Lastly make sure the machine has water and plug it in. When it's warmed up make yourself a brew. You've earnt it! 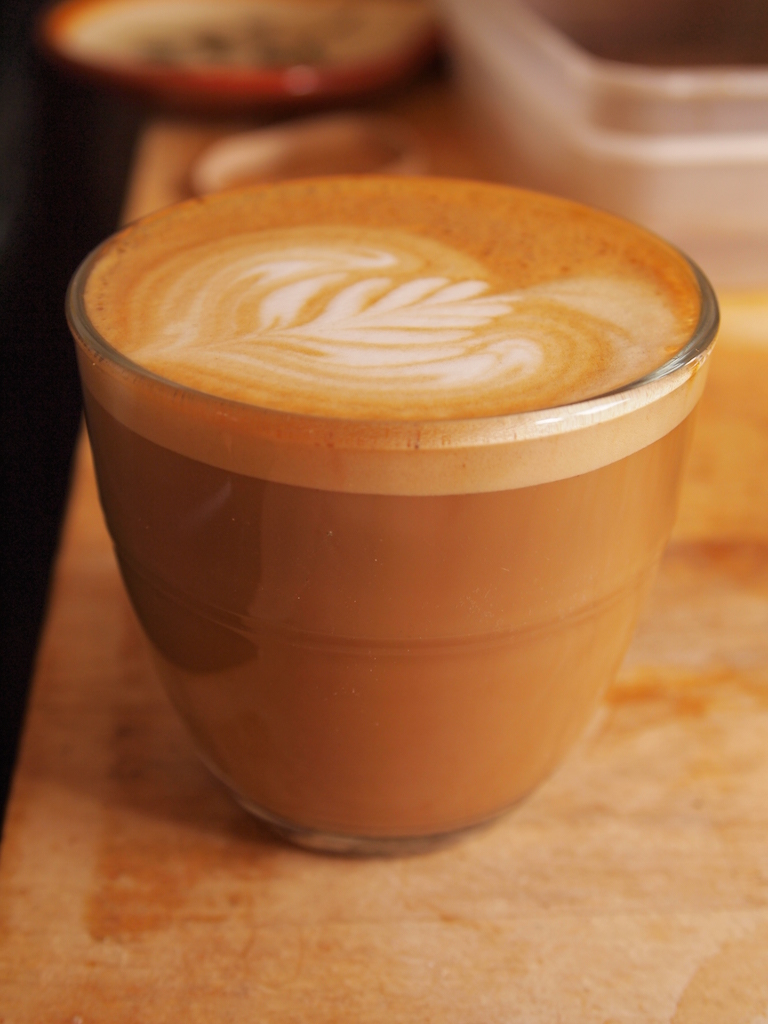 How to clean a doserless Macap M4 grinder

The Rancilio Silvia is a robust machine if you look after it.…